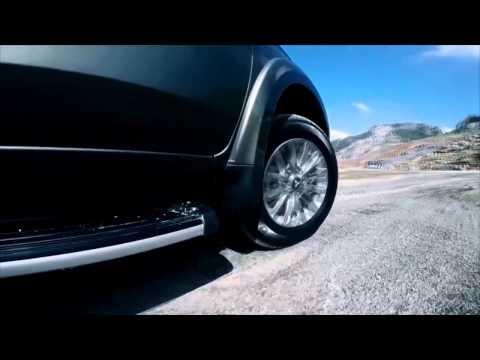 L200 Series 5, the pick-up truck perfected, it's the most accomplished pick-up truck Mitsubishi has created. After 33 years of refining the ultimate pick-up, Mitsubishi present to the world a truck for the future, built upon the same DNA that made previous generations so successful.

Awarded by Auto Express as Best Pick-up 2015, the L200 Series 5 has been engineered to be the best driving pick-up Mitsubishi has ever made. The L200 Series 5 boasts outstanding features across the board including:

INCREDIBLE MANOEUVRABILITY
With a turning radius of just 5.9 metres, improved steering ratio and a brand new MIVEC engine, the L200 Series 5 is the only pick-up with variable valve timing, the all aluminium diesel engine in the L200 Series 5 weighs 30kg less than Series 4, and is the most efficient and powerful ever in an L200. The most dynamic driving pick-up truck on the market.

INTELLIGENT 4WD ABILITY
With Mitsubishi's unique Super-Select 4 wheel drive system the L200 is the only pick-up that can be driven in 2WD or 4WD on any surface including tarmac. Driving in 2WD gives fuel saving efficiencies, while the 4WD mode provides better traction in wet or slippery conditions and more stability when towing.

IMPRESSIVE FUEL ECONOMY
The L200 Series 5 is more fuel efficient than ever and can save you hundreds per year. Capable of over 700 miles on a single tank of fuel, the L200 Series 5 takes you farther than ever before with a brand new MIVEC diesel engine that doesn't sacrifice power or efficiency.

THE CLEAN PICK-UP
L200 Series 5 has amongst the lowest CO2 emissions of any pick-up truck on the UK market, safeguarding you against future emissions-based tax regimes.

OUTSTANDING TOTAL LOAD CAPACITY
The L200 Series 5 has a total load capacity of 4,090kg, more than any competitor and is equipped with Trailer Stability Assist making towing safer than ever.

The L200 Warrior offers a choice of all-new 6-speed manual gearbox, more responsive than ever, or 5-speed automatic with paddle shifters for a relaxing responsive drive whilst the paddle shifters giving you the option to take control.

Not just the best driving driving pick-up Mitsubishi has ever made, but the best equipped too. Well-designed and well-equipped are not words normally associated with a pick-up but this is yet another area where the L200 shows its class. Always perfectly combining comfort with practicality there’s a level of specification to suit your needs precisely, as well as an enormous range of accessories from which you can cherry pick.

Arrange a test to see for yourself why the L200 Series 5 is proving to have a winning formula, receiving industry accolades from Auto Express Best Pick-up 2015 and 2016, and What Van Pick-up of the Year 2016... 'with a modern engine, fuel economy and high specification the latest Mitsubishi L200 pick-up truck sets new standards in the UK pick-up class'.

For more details of the Mitsubishi L200 Series 5 range and to arrange a test drive please contact the Firs sales team on telephone 01608 737349.

Notes:
Competitor comparisons are made against all equivalent models in the segment and were correct at time of publication.
Total load capacity: For all pick-up trucks the total load capacity will be reduced when taking into account a tow bar and additional equipment.